Just Be A Catfish - Just Being Funny

Flashback to one month earlier. My birthday was coming up, and I’d decided to venture into online dating with the hopes of landing a date before the end of April. In an age where Tinder and Grindr are things, I thought choosing OkCupid would be the smart option for quality dates. Wrong! Had I searched the net for ‘OkCupid horror stories’ or watched MTV’s Catfish I would have known to set the bar low. Way low. Low like dig a hole and bury it. 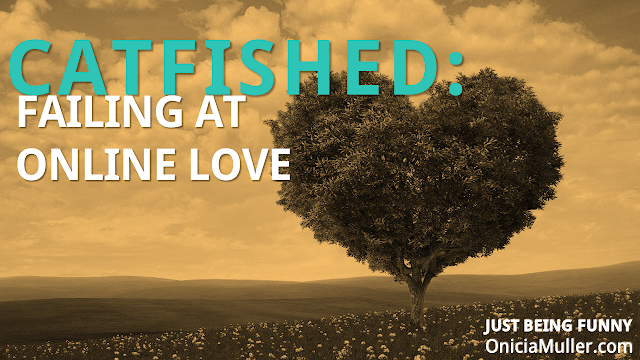 Very quickly I learned not to respond to messages that had even a hint of sexual innuendo. Sir, how dare you send me a “Hey, sup?” like I’m some common Jezebel!
Right before I gave up hope, Roberto messages me. I check out his profile. We’re a meh match and I’m not physically attracted to him. But, since he didn’t hit me with the eggplant in the first go, I figured I’d respond.

He’s regular. Aside from being prone to write days of scripture, he’s regular. I think, maybe I’ll grow into this love. I invite him to meet up at a café since we both live near the city. Radio silence.
“Well, the thing is I weighed like 270 before joining the Navy. I got down to 178 in three months so I could join. Gradually I gained the weight back. I allowed myself to get out of control. Now I weight approx. 325 lbs…”

Dear Diary, I finally learned why Roberto from OkCupid didn’t jump on the chance to meet me. Even after I told him I was still interested in meeting up, he told me I was too hot for him and asked that I wait a few months. Listen, I’m on a deadline and refuse to let these internet man dem catfish me out of my time or money.

Later that year, I traveled across international waters to meet another dude whom I’d only previously met online. I wondered if he would look the same in person. They said he was tall for his age but everyone knows internet man dem lie about their height.

While he was taller than I expected, he was only able to recognize me after I called from Skype to prove I was he person who lived in his mom’s tablet.

Happy birthday, Luparelo. May you always be loved and never catfished.