A French Translator - Just Being Funny

Every Caribbean person comes out the womb bilingual. My goal in life was to speak at the least seven languages and maybe one day work as an interpreter at the United Nations. On my quest to mastering seven languages, I came across a little known tongue called Spanish. 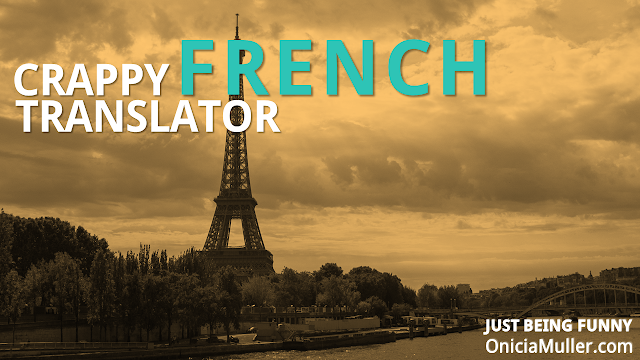 As a big headed teenager, I believe French, Dutch and English were the most important languages in the world. Spanish was not going to be a thing. School administrators should stop trying to make Spanish happen, readjust the budget, and double down on teaching French. ‘Cause honesty, anyone who only spoke Spanish probably didn’t do anything great.

Obviously, I also struggled with history and world geography – as if you couldn’t tell from those strongly held and embarrassingly ignorant beliefs. The universe would later have me insert my foot – nay my entire leg – into my mouth because my future children are Afro-Latino. A moment of side eye and several seats for past Spanish-hating me.

But back to mastering French, It was the days of dial-up internet. My high school’s study career guidance room recently acquired two computers. Game changer. No longer would I worry about losing my USB stick or damaging my floppy disk. I could just access files via email.

“Oh, you’re in a rush to download your homework? It would be a shame if this cable became mysteriously damaged.” - G.E.B.E’s resident rat.

Theory test day: I’d forgotten to find and print a French article for my oral exam. Without considering the risks (i.e. electrical outages, unstable internet connection, and the devil), I lied to my teacher about forgetting to print my article. The plan was simple. Log onto MSN.com and pick a short 500-word article about anything. Next, I would navigate to MSN.fr, scroll until I found the same lead image and print that article.

Premature celebration at finding a vacant workstation. The connection was so slow, I imagined it was less painful to pluck my leg hair. Hail and brimstone! The MSN websites were not identical. Apparently, Americans and the French do not have the same interests. Strapped for time, I dumped the Britney Spears article into a translation website. Then, I updated the source URL to say ‘.fr’. I was the wisest teenager ever.

I was not the wisest teenager ever. Barely reviewed the printout my teacher said, “This is not French.”

“Really? I found it on MSN France’s website.” I bluffed.

Eventually, I was granted an extension. Moral? The robots hadn’t mastered translations. The UN would still have translator vacancies. Hopefully, they had a better internet connection.