I was looking for the right person to fill a vacancy. I wanted to be about diversity and equal opportunity. With that mindset, I decided to go on my first date with an Indian male. What? I didn't say I was an employer. I said I had a vacancy that needed to be filled; that vacancy was in my heart. #Puke. 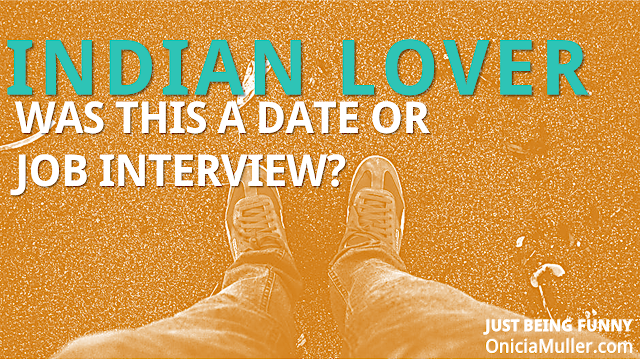 Honestly, his profile was forgettable, but because his first message was not sexual and we lived within a small distance from each other, accepted his offer to meet up. No, I was not attracted to him in the least, but I was also trying that thing where I didn't base everything on looks. I tried to convince myself that I might be a person who could look beyond physical appearances and grow to love someone based on their character alone. We skip the pen pall phase and cut straight to meeting at a cafe. This was going to be my first charity date. I was ninety-nine percent sure that we would not hit it off, however, as an international student, I empathized with being alone in a big country and was willing to be campus buddies.

I'm at the subway station, where I spot this super scruffy brown dude leaning against the wall. Super casual. He doesn't appear to be waiting on someone. Disappointed. The only other people is a white dude, the subway attendant, and the donut shop person. He looks nothing like his profile photo. How you have the nerve to look worse than an already bad photo? Homie looked like he was living a rough life; worse than someone residing in a storage room, who only ate instant ramen, and showered at gyms because they didn't have a real apartment. I know someone who lived that life! His five dollar Polo, basic mom jeans, and -- wait for it -- open-toed, dollar store slippers, did not lead me to believe he was waiting for a first date. Now, I slum with the best of hobos, but I doubted that homeboy was searching for love so much as he was about to walk down the road in search of Chinese food.

We go to a nearby sandwich shop. Looking back, I don't think we were ever on a date. Mister skipped the pleasantries and began a very aggressive job interview? He grilled me about whether I thought our school was the best, why I decided to be a writing major, and my thoughts on tuition? Dread, ain't we both already enrolled? Please ask the admissions department, not me. "What are you going to do with that degree? Will you make money? Are you a good writer?" Luv, we are both from the third world and you are not my parent.

The date ends as I finish my sandwich. I needed to get away from Mr.  Hummus and his ashy toes. Yes, I was still disturbed that he came on a date with his un-lotioned toes exposed! Homeboy’s toes were so ashy if he used an entire bucket of lotion he would still need three buckets to complete the job. At home, I send my official thanks, but no thanks.

“Why don't you want to date me?” he asks. I reply, “I'm not required to want to date you or explain my choices." #BeAssertive. "I'm down for friendship." #MixedMessages.

Weeks later, I receive a message on a different platform. Level-five clinger?! Diablo! "...We already dated and I'm not interested." A week later: ‘I know! That was a mistake!” You're right that date was a mistake. Stop screaming at me and go lotion yuh feet!