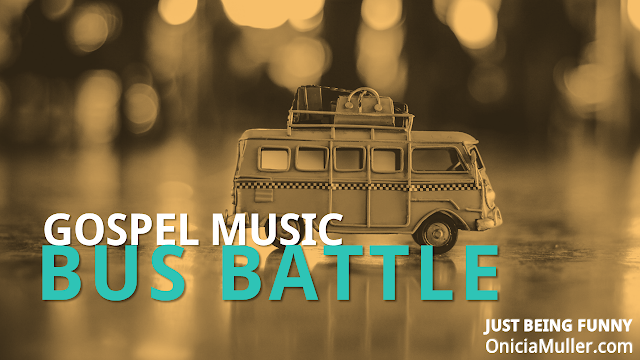 I have a love-hate relationship with public transportation. I love it because it's an opportunity for me to go outside without actually being outside. People watching is great for story inspiration and dialog development. What I hate about public transportation? People putting their feet on the seats, those who leave their trash behind, and those with questionable hygiene. This one bus near my home in Chicago is consistently a rough ride; ish is always going down. This is not just some delicate Chicago transplant's opinion. My born-and-bred Chicago friend posted, "If you ever want to lose a little faith in humanity, take the [omitted] bus going in any direction. #YouPeopleNeedJesus #WTH."

Between that post and the night in question, another Chicago friend shared how she disliked people who played music using their phone speakers instead of earbuds. I commented, "Yeah, that's so annoying. The next time someone does that, I'm going to challenge them by playing gospel music. WWJD? Not that!"

It's after 9 p.m. -- or as I like to call it 'sketchy o'clock' -- and I'm waiting for this raggedy bus. A guy, playing music through his phone speakers, pulls up on his bicycle. I'm not mad at bikers because listening to music through headphones while riding is very dangerous. However, when the bus comes, I need them to act correct and obey the rules. I don't care whether it's a song I know or what time it is; I'm not trying to hear your weak playlist.

The bus arrives, we board, and homeboy is still playing his music. Problem: he's playing contemporary gospel music. Sure, no one will know that I backed out on my promise of confronting the next offender. But, it bothers me to my soul that he's making Christians look bad. Conflict: do I point out his bad behavior by playing aggressive secular music, or do I keep my original plan and play gospel music? One friend suggested that I find the most satanic music and battle him with it. I didn't feel like that was the right thing to do because it did not help to win people for "the cause." I wanted him to know that he was inconsiderate; he was not the hero in next week's praise and testimony service. I decided that what Jesus would do was have a civil gospel music battle.

I interrupt his Jamie Grace with some Kirk Franklin and his bomb brass section. He responds with some whispering Christian Pop. I double down by upping the volume and blasting TobyMac. Yeah, I got that good Christian hip-hop. Obviously, my speakers are superior and his Hillsong United can't drown out Jeremy Camp's Take My Life. People on the bus are utterly confused. My five friends joining me via Facebook Live are going wild. (I might be embellishing, but you have no proof). Yes, my first ever Facebook live stream was a gospel music battle on public transportation. I sure showed that guy!

No, I didn't. We crossed paths a few days later. He was still bumping his music through his speakers. I guess we can't convert 'em all.