Serving a ten-year prison sentence in Mexico was not the way I envisioned celebrating my twenty-third birthday. God, please don’t let my life become the sequel to Brokedown Palace. 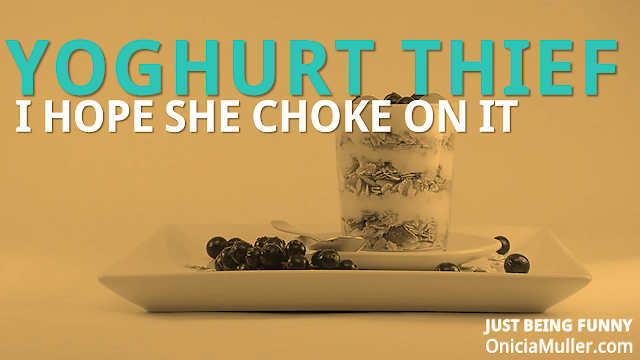 It wasn’t my choice to live in a 20-bed hostel, but after witnessing the Euro’s spending power, I’d definitely do it again. Weekly manicures and triple-scoop ice cream desserts -- we were the queens of Monterrey. No longer afraid of contracting Bird Flu or being taken by the Mexican cartel, my only concern was passing Spanish 101 and making out with a hot cabana boy. Unfortunately instead Stella in How Stella Got Her Groove Back, I became the lead detective in my own Nancy Drew-type novel: Onicia Drew and the Case of the Mexican Yoghurt Thief.

As hostel life goes, we were limited to one shelf in the shared refrigerator. Every week, I bought a specific amount of yogurts to meet my breakfast dairy needs. When I found myself short a few yogurts, I had to collect my proverbial balls and confront my roommate. “Hey girl, I know we’re living together, and I’m cool with that but can you let me know when you’re eating the last of something? Now I have a bunch of granola bars and no yogurt.”

After giving me a look that told me she was holding back a wave of choice words, the roommate explained that she had not taken my cups of fermented milk blended with mushy fruits. An unfortunate awkward moment that was exactly why I prefer passive aggressive methods. A few weeks passed, and more cups of tart and tangy mammal milk went missing.

The hotel owner’s response to our complaint was to stick a warning on the fridge: No molestes el yogur de la niña. Sarcasm: oh yeah, a stern written warning was definitely going to solve our food issues. Because a person who blatantly disobeys the unspoken laws of a shared refrigerator would somehow learn to act right when there’s a sign telling them not to. Those ABC magnets really inspire fear. When the yogurt thief struck again, it was time to take surveillance into our own hands.

One day we came home and found that someone was cooking ground beef. Them using every stove burner and every pot in the kitchen didn’t bother us. However, using OUR GROUND BEEF caused us to snap and nearly end up on an episode of National Geographic’s Locked Up Abroad! The yogurt thief expanded their criminal enterprise to include both dairy and meat products. Sure, it a logical step but this is not a business class; this was war.

We sprinkled a random assortment of spices, condiments, and other edible and inedible items into the pot. Did we spit in that food? Some details are for your death bed. Then, like true Millennials, we went to our room and shared the situation in a vlog. The coughing and choking sounds continued for longer than anticipated. Maniacal laughing changed to silence and wide-eyed stares. Did we unintentionally cross the line between harmless prank and criminal offense? She survived. We never again had to worry about stolen food. Most importantly, I never saw the inside of a Mexican prison. Moral: Won't start nothin' there won't be nothin'.