How to Submit More with Hopefully Better Results - Hey Onicia 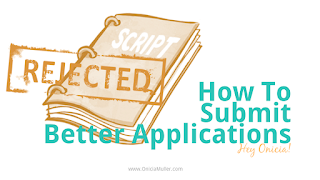 Are you an aspiring screenwriter who rushes applications for random submission opportunities? Do application fees feel more like impulse purchases versus strategic career investments? Does rejection fatigue and anxiety make you unable to write until the next late-notice opportunity pops up?

Good news! You’re not unlucky; you’re unprepared. Here’s how screenwriters can submit more with hopefully better outcomes – or at least free you from the anxiety cycle caused by rushed submissions.

Hey Onicia is a series where I tap into my type-A side and answer questions from my friends about this starving artist life. If you find this helpful, share with your twitter homies or thank me with ice cream. Want to chat or collaborate? Holla at me!

Don’t put the cart before the donkey
Focus on writing a great script and then search for appropriate opportunities. Jeffery Lieber (Miami Medical, NCIS: New Orleans) often advises writers to skip screenwriting contests. Screenwriters should instead move to LA and network while working film jobs or pursue independent productions.

You shouldn't submit anything until you're really sure that your script id the best it can be -- wait ‘til you have great feedback from professional readers or a few top contest finishes.

Fail and fail again
Now that you have a polished script, it’s time to fail. Some artists say you should aim for 100 rejections before giving up. This can be a lifetime or annually goal. Building stamina is the underlying idea of 100 rejections or 10,000 hours. Use sites like FilmFreeway, Without A Box, or the Black List to save research time by letting the opportunities come to you.

Note: just like you don’t have to spend 10,000 hours on a single project to perfect your craft, you don’t have to – in fact, you shouldn’t – submit the same draft to 100 contests. There aren't that many worthwhile contests. More importantly, if your script doesn't do well in say ten contests, that's usually a sign that it needs more work.

You should be exercising your writer’s muscle by completing more scripts. You improve your ability to bounce back from rejection by submitting more. It's a bit different if you're talking about submissions to companies and producers, though.

Filter and prioritize
At the time of writing, there were roughly 1,000 screenwriting contests on FilmFreeway. Unlike playwriting or submitting to publications, screenwriters face some of the highest submission fees for writing-oriented opportunities. While $25 is the average application cost, some exceed $70.00. Going with the average, attempting 100 fails could cost $2,500!

Casting such a wide net isn’t necessarily the best approach in screenwriting, maybe for an independent production. Consider setting an annual budget. Prioritize writer initiative programs, diversity programs, or fellowships directly associated with studios or networks. After that, submit to anything that’s free and relevant to a script that’s already polished.

Fail better
Most opportunities are annual and require similar documents. Instead of starting each application from scratch, Donna Hoke offers excellent advice on how to be ready for any opportunity. Donna’s plays have been seen in 43 states. In short, she advises writers to save all submission materials in editable files.

Even when typing directly into an online form, you should save your responses into a Word document. You’ll have the answers handy for the next submission or (fingers crossed) as a reference for interviews. Donna’s method also works for job applications.

Having a stronger draft definitely helps with failing better. Consider staggering your submissions, so you have time to implement feedback or proofread. You can do this through various stages of the writing process is. Tightening your logline, outline, or getting professional script coverage can be worthwhile investments.

Some contests like Screencraft’s Pilot Launch disqualifies your script if “becomes optioned, published, produced or purchased between the time of submission and the end of the judging period.” Staggering ensures you don’t waste money and never had to choose between two acceptances.

Proof of concept
Donna Hoke elaborated on her posts and how it’s helped her career. “What this post doesn't talk about is the expected returns, which run five to ten percent max, and which can look like anything from a semifinalist hit to a full production. That may not seem like much, but, unfortunately, it's a numbers game, and it's also subjective; even the best play is only going to be best to some people. It's best to do the work, forget it, and know that as long as you have submissions out there, you're in the game, and good news is always just around the corner.”

After polishing my web series script, I broke my 2-year no submissions drought and tried Donna’s method. Submitting that script to 12 opportunities resulted in three semi-finalists placements. The following year I sent three new works to 15 contests. I earned one acceptance/win. Confession: I kind of rushed those project. However, if I count my submission for freelance writing and comedy gigs, I have a higher success rate. Surviving 100 rejections is easier when you do the prep work and practice the first tip.

“I wound up with 413 submissions. I'd seen a lot of advice for writers and playwrights that you have to keep putting the work out there, the same as having to actually do the work of writing. It was just a matter of being more diligent and actively looking for opportunities through a variety of sources. It also required a bit of a shift in thinking: Instead of making a production the end-goal, the submission became the goal. Any acceptance was icing on the cake. I think of it as being like Benjamin Franklin: I've got the kite up in the sky, and I'm sending up key after key after key, trying to get as many places as possible for lightning to strike.

This approach resulted in productions in Carnegie, PA, Grand Rapids, MI; one 10-minute play selected to be performed on the same day in Virginia, Indiana, Kentucky, Colorado, Florida, California, Ireland and Japan; a short story published in Spokane - my hometown and current residence; attending a writer's workshop with one of my favorite novelists in San Francisco, CA; an interview and reading of one of my 10-minute plays on a podcast, and several opportunities coming up in 2018.”

There you have it. To be less unlucky, try being more prepared.


What do you think? Tweet me questions using #HeyOnicia
I'm a creative with type-A tendencies who tried working in a call center but realized I'd rather help creatives get organized. I'm pimping out all my marketable skills to fund my art and ice cream habit.
Want more tips for being a creative professional? Subscribe. FREE RESOURCES. Buy me ice cream. Share.