Help Me Decide My Next Project - Onicia Update - May 2019 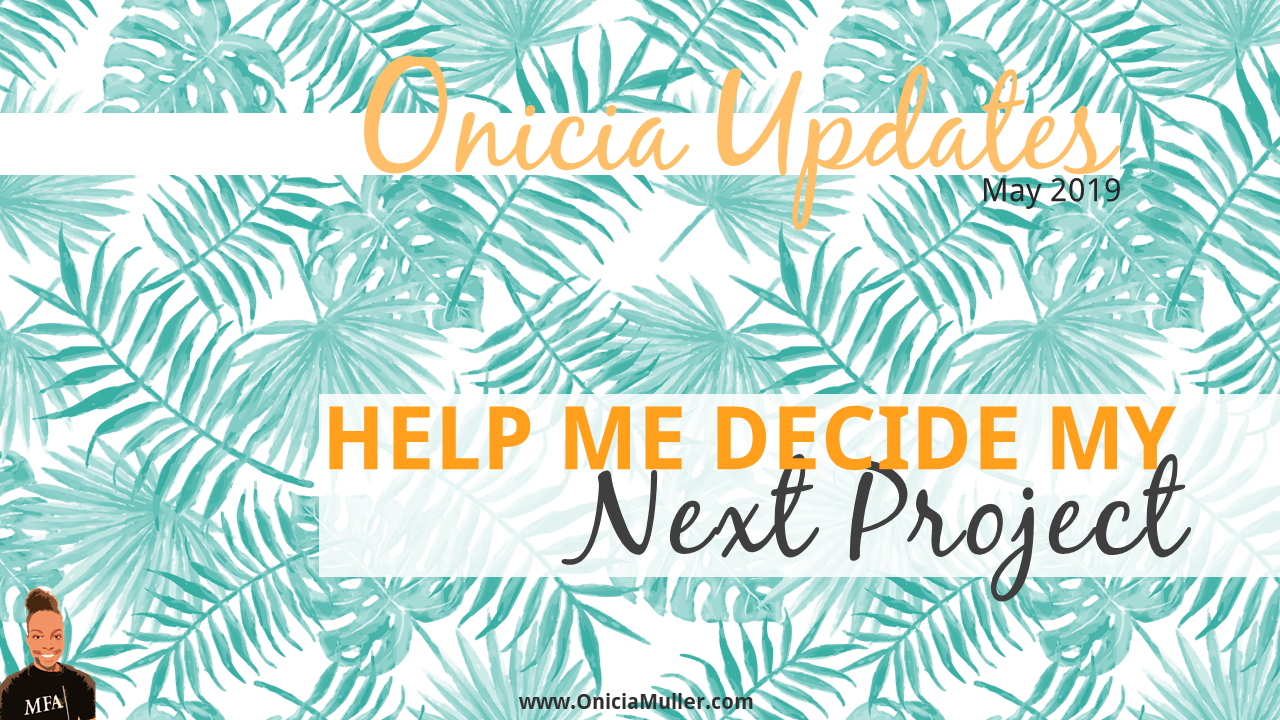 April showers were supposed to bring May flowers but here in Chicago, it seemed we got more showers upon showers. Ain't that a trick? I've been doing all the things but I want to know what should I focus on next?

I'm taking a holistic cycle awareness class by Maya Moon Cycle. The free online class is every Monday in June. Email Maya at maya.moon.cycle [at] gmail [dot] com> to register. The roommate and I had a few fertility consultations with her. Maya is very smart and compassionate.

This month I was hard at work not writing new entries for Just Being Funny. Why? Well, I don't want to just give you witty word vomit. I want to share stories that will make you think. Are you interested in a Caribbean story podcast? I have friends who write words. (BTW, I'm very flattered by all the nice things Candice Lola said. #GetChuABlackWomanFriend)

I reviewed the second edit of my episode of Pre-Existing. Dudes, David and Lissette are doing amazing work. It's true what they say: You write your story three times. Once as a script. A second time while you film. And a final time while you edit the footage. Would you like me to share behind the scenes footage for projects like Pre-Existing, Bathroom Confessionals, Oh Baby!, and Suckers Garden?

In June I'll be doing my first comedy show for 2019. How am I feeling? Well, my comedy uniform still fits so there's that! Should I post more storytelling and stand-up comedy performances? Should I review or curate comedy videos featuring women comedians?

I wrote a new half-hour pilot about two artists who embrace the idea that they'll never be famous and that's okay. Speaking of which, Maya Montrell and I developed a pitch for a web series project tentatively titled Counting on Kendra. Should I publish some pages from the pilot?

Counting on Kendra: When her prestigious forensic accounting career is paused, a Black woman (30) with an undiagnosed chronic illness stumbles into the risky world of private investigations. Now the Chicago Police Department is determined to stop her as her work uncovers their major deficiencies.

Currently reading a book about boundaries. Still chomping on Small Business for Dummies. Don't sleep on public libraries, yo. Should I create a digital bookshelf so you can keep up with what I'm reading?

I wrote a young adult novel called Getting Jamie when I was a teenager. It's a Caribbean crime comedy situation involving a girl fresh out of juvie, nasty Dutch gangstas, a pot-dealing ice cream truck driver, and all the typos and grammatical errors ever. Would you like me to edit and publish an excerpt?

The kates is an all-female comedy showcase in Chicago. Some really talented women have passed through their doors. This month, I want to remind or introduce you to the force that is Aparna Nancherla. She's funny on Twitter and in real life. You're welcome!

JBF: Just a Lil' Bump to get the Party Going (The Daily Herald)
Man, I just wanted to dance and breathe in the night’s fresh air. I didn’t want to play intervention with some rando travel companion. If you want to do drugs, go ahead and do it. Don’t rope me in the shenanigans.

6 Tips for Ending a Friendship Gracefully (CurlyNikki)
It felt horrible abandoning my friend at what seemed to be a low point in her life. Six months after our last conversation, I reconciled that we were both running on empty and didn’t have anything left to give. I finally forgave myself and my friend for letting our relationship die, and I learned some valuable things in the process.

JBF: Jamaican Book Thief (The Daily Herald)
It took a moment, but I found a decent book and a private corner. However, my escape was interrupted by scenes of a grade-schooler struggling with the report. Judy lamented about being unable to finish her report because of her three o’clock curfew. She’d recently emigrated from Jamaica and as such did not have a library card.

Not Your Token Character (LA-Screenwriter)" I came quite late to writing, mainly because it’s such hard work. It’s the one skill I resisted even in film school. I am a visual person. However, realizing that good scripts are hard to find, I slowly made a move to write more. I’m lucky because I have so many mentors who are professional screenwriters."

Here's what I'm fangirlin' over.

Kev Failed, Miserably (KevOnStage / Righteous and Ratchet podcast)
Kevin and Doboy recap the "failure" that was Kevin's attempt to sell T E N  T H O U S A N D tickets to his recent Chicago show. I was there and laughed until I cried. Click to Tweet

How Does Morenos Luxury Housing Policy Drive Displacement(Somos Logan Square)
This organization is going great work protecting tenants' rights in Logan Square. If you have a cause or organization you care about, sign up to their newsletter or phone list. The algorithms hate everyone; joining the email list is the best way to keep up with what's happening. Oh yeah, actually add their events to your calendar (including travel time) to ensure you show up and show out.

Sober Thoughts: Pixel 3a (Daniel Regueira / Techqila podcast)
Daniel's podcast is saving me from becoming that crotchety old person who doesn't understand the what and why of technology. Click to tweet.

Naturopathy with Haven Chicago (Kelly Howard / Be Less Petty Podcast)
Amma level with you, daily coffee enemas are not my thing, but self development is. Be Less Petty TV and Podcast has been providing me things to think about every week. Click to tweet.

I am a Feminist Christian Parent (Rachel Berg Scherer / Rebellious Magazine)
"People always lean in close and ask in hushed tones: “You go to church? But I thought you were…you know. A feminist.” They whisper that last word just a bit more audible than a whisper. They scratch it out as if it was a different type of F word. One..." Click to tweet.

Last Car Payment, Who Dis? (Angelica Davila / Breaking the Piggy Bank)
I don't have a car, but I'm internalizing this nugget of wisdom: Discover what milestones you have in mind for measuring your own steps toward better money habits and skills. ... You get to decide what your milestones are, and you get to celebrate when you accomplish them. Click to tweet.

The Haven (Mia McCullough / OTV)
Sooo, I've watched The Haven about four times now. The Haven's pilot always reminds me of an episode of Any Day Now, a television series which starred Annie Potts and Lorraine Toussaint. There was an episode about domestic violence that completely shifted what I considered to be acceptable bad behavior within a romantic relationship. But, The Haven is more than lover punching each other. There's so much to unpack. Watch it and then email me your thoughts.

Sittin' in the Sadness (LT in the City)
This newsletter popped up right. on. time. Sometimes when something embarrassing or upsetting or [insert negative emotion] the best thing to do is allow yourself to feel all the feelings. Try it. It is life-changing. Click to tweet.

The Real Cloak of Invisibility (Amy Sumpter, Kelsie Huff / Shaped podcast)
This episode of Shaped. Amy Sumpter (highest of kicks) and Kelsie Huff are saying all the things you need to hear about being an older woman and feeling invisible. You're welcome.

Do you make cool things? I might feature you in my next newsletter. Let's collaborate!