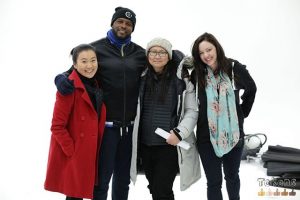 After watching the series, I daydreamed about how much more exciting the storytelling world would be if there were more diversity in gender, race, and bodies on stage and screen. Like, what if there were a mandate that one role must be randomly cast.

In her interview on tokenized POC characters in visual media for LA-Screenwriter, said she was tired of seeing Asian characters as one-dimensional caricatures. Realizing that good scripts are hard to find, Jong set out to write her own story.

Oh yeah, Tokens also calls out issues with diversity in the production team. This series is everything. Winnifred and her team really did something.

Tokens is a tongue-in-cheek comedy about the actors who find themselves randomly sent to productions desperate to hit their diversity quotas. Think Uber for actors. The project was nominated by the Women In the Director’s Chair for Telefilm Canada MicroBudget Program funding. It’s also was one of 21 projects that received funding in the inaugural year of the Bell Fund – Short Form Digital Series Fiction Program.